The Hospital was founded by William Browne, a rich wool merchant of Stamford, and built in 1475 in the reign of Edward IV. With his brother, John, William Browne was largely responsible for enlarging and embellishing the Church of All Saints nearby. He and his wife are believed to have lived in a house adjacent the western side of the Hospital, and so would have been parishioners of All Saints', where brasses to three generations of their family may be seen.

In 1485 William was authorised by letters patent of Richard Ill to found and endow the almshouse, but after his death and that of his wife Margaret, in 1489, the management of the Hospital passed to her brother, Thomas Stokke, Canon of York and Rector of Easton-on-the-Hill, just outside Stamford. Stokke obtained new letters patent from Henry VII in 1493 and the chapel was consecrated by the Bishop of Lincoln on 22nd December, 1494.

The Hospital or Bedehouse - a name by which it was also known - was established as a home and a house of prayer for 10 poor men and 2 poor woman, with a Warden and a Confrater, both of whom were to be secular, i.e. non-monastic, priests. The statutes required attendance at chapel twice daily, where masses for the repose of the souls of the Founders were said, but on Sundays it was to All Saints' Church that they had to go. The title "bedesman" or "beadsman" given to the poor men was derived from the beads of the rosary. With the passage of time, a new charter became necessary and this was granted by James I in 1610, and thus Browne's Hospital may claim to be a Royal Foundation or Royal Hospital. 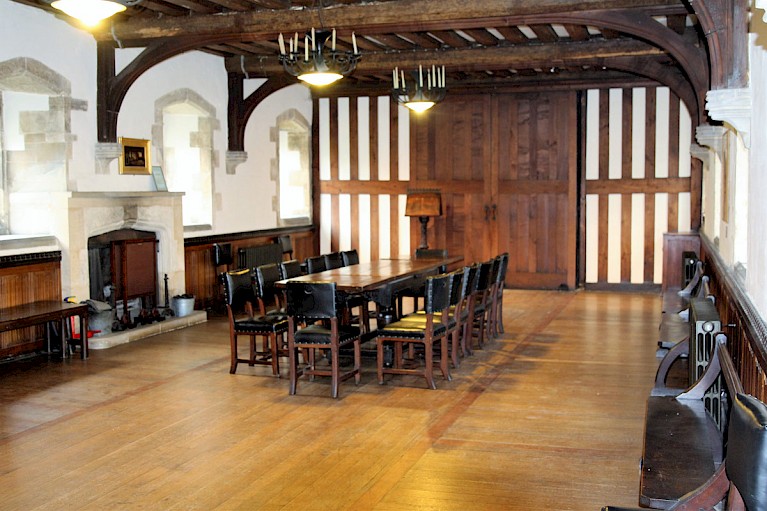 COMMON ROOM - From the entrance porch, having a statue of the Founder over the arch, the door on the right is that of the Common Room which housed the "ten poor men" in cubicles on either side, each man having a window. The space allotted is delineated by the strips of darker wood on the floor. Two windows in the north wall were removed in the 19th century alterations, when the fireplace was inserted. The two women had a room in a range of buildings to the north of the main block. The Common Room was open to the chantry chapel through the carved screen of 1475 so that sick or bedridden men might see and hear the services. The sliding panels, forming a more substantial division from the Common Room, were put into place in the 19th century. Similarity to the Hospice at Beaune in Burgundy is illustrated by the exhibition of photographs of that institution, founded 40 years earlier.

In 1870 it was decided to improve conditions for the residents, and to repair dilapidated buildings, and James Fowler of Louth was called in to draw up plans for separate cottages around the cloister, for the central clock to be moved to an elegant tower to be built over the entrance and for the small house at the eastern end of the chapel to be purchased and pulled down to make way for a new Warden's House. The former Common Room now became the Board Room. 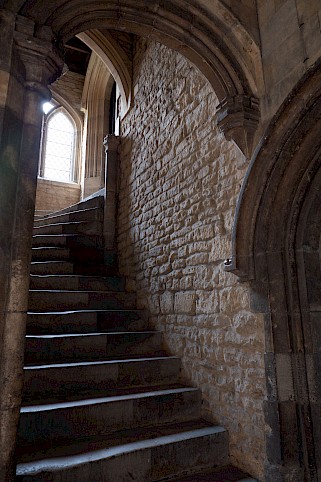 STAIRCASE - At the foot of the stairs leading to the AUDIT ROOM is a brass wall-plate with the Founder's Arms and a Latin rhyming inscription recording the origin and purposes of the Foundation. The stairs lead to the ANTE-ROOM where changing exhibitions are held. In 2002 this marked the 125th Birthday of the High School and recalled the gift by Browne's Hospital of a substantial sum of money which enabled the creation of the High School for Girls, the enlargement of Stamford School for Boys and the building of the Headmaster's House. From 1873 until the 1960s, when the revenue of the Hospital became too small for its own needs, a sum of up to £1,500 was donated annually to the Endowed Schools who adopted for their motto and badge the device of the Browne (Stokke) family of the stork on a woolsack and the words "+ me spede". Also in the Ante-room is displayed a uniform which the men were required to wear from the middle of the nineteenth century until the 1950s, soon after which compulsory attendance at Chapel was no longer a rule of the Hospital. Almspersons did not always come from Stamford, but seem to have been drawn from the surrounding area where the Hospital had properties, and it is likely that men living in tied­ cottages who could no longer work were recommended for a place at Browne's by the incumbent of their parish. 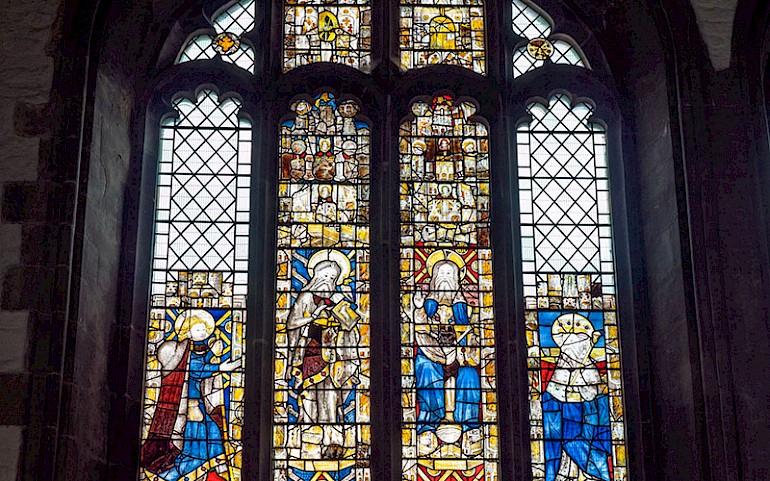 CHAPEL – At the west end of the Chapel is a row of original stalls with carved misericord seats, the other seats facing north and south. A service of Holy Communion is taken here by the Confrater every week to which visitors are welcome. There has been no Warden since 1987, and the Warden's House is let for offices. The magnificent stained glass windows are contemporary with the 15th Century building. The glass was removed, cleaned and the original arrangement as far as possible restored and replaced in 1967, with the aid of a grant from the Pilgrim Trust. In 2001 it was thought necessary to place guards over the outside to protect the glass from missiles. For this we received help from the Manifold Trust. 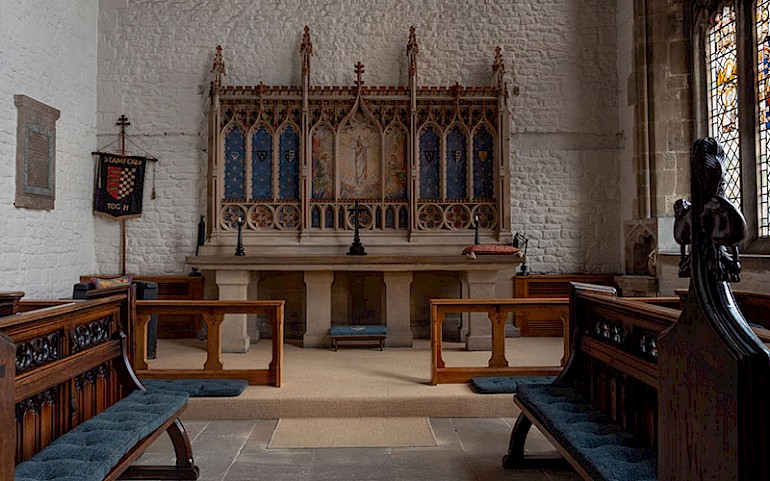 The Altar slab is of Barnack ragstone and bears its five consecration crosses. It was hidden in the paving during a period of religious intolerance and rediscovered and replaced only in 1925. The fifteenth century cope-chair was designed with a semi-circular back around which a seated priest could drape his vestment to avoid creasing it. A second, similar, chair disappeared in the nineteenth century building work.

The reredos was painted in 1919 to commemorate the Golden Wedding of the then Warden and his wife and restored in memory of Robin Lowe, for many years Clerk to the Governors.

The kneelers were designed by Pam Sharp, Museum Curator 1998-2018, and worked with the collaboration of residents and friends of the Hospital. 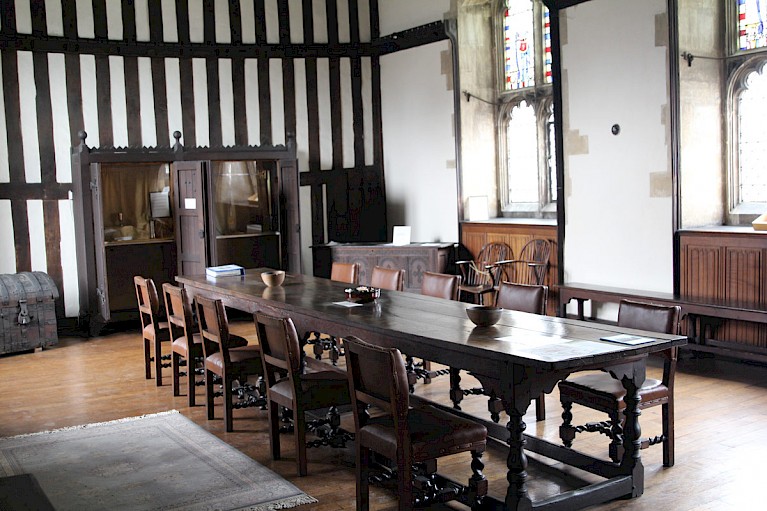 THE AUDIT ROOM leading off to the left is the room in which all the business of the Hospital was transacted, around the oak table which is over 5 metres long and bears the initials PR for Peter Routh who was Warden in 1583 when it was made. The Hospital had been richiy endowed with property and agricultural land in the neighbourhood and an extensive archive remains giving information on all aspects of the management of this and of the domestic affairs of the Foundation.

The stained glass windows in the AUDIT ROOM are of the same date as those downstairs. In the show-cupboards at the east end of the room is an ancient almsbox which was recovered from a wall during the alterations. The massive iron-bound chest was given by Thomas Stokke and used to guard the Foundation Documents and other precious possessions of the Hospital. It was secured by three padlocks and could be opened only when the Warden, the Vicar of All Saints' Church and one of the men were all present each with his own key. The carved chest of 1629 has a candle-box and a drawer at the foot. The fireplace is original and the carved oak cornice around the top of the walls carries hooks ("tenterhooks") for the suspension of hangings. The Windsor chairs are of a local pattern and one was placed in each cottage after completion. 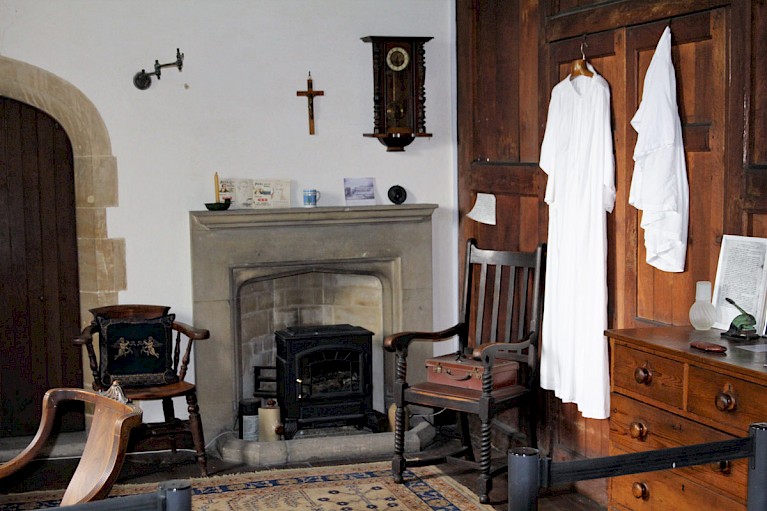 THE CONFRATER'S ROOM contains original furniture and was retained as a sitting-room for him when the rest of his lodgings were pulled down in 1870. He was then no longer required to be resident. The sitting-room was last used in 1950s by Canon John Parker. The stained-glass window in the light-box was found in a cupboard and is presumed to have been removed from one of the dismantled rooms which lay beyond the adjacent oak door. It is a mixture of mediaeval and later glass.

Visitors may remember that Browne's Hospital featured as "Middlemarch Hospital" in the film adaptation of George Eliot's novel "Middlemarch" much of which was shot in Stamford. The Hospital is today home to 12 residents as specified in the Foundation, but at the present we have 10 ladies and 2 men. The cottages around the beautiful cloister garden were updated in 1963 to flats, each with a living-room, bedroom, kitchen and bathroom.